Polystyrene recycling is a challenge for businesses in Leeds, Huddersfield and Wakefield. Polystyrene is a commonly used packaging material, as a such is covered under the Waste, Recycling and Packaging Act. Unfortunately it is not commonly recycled and often ends up in landfill. 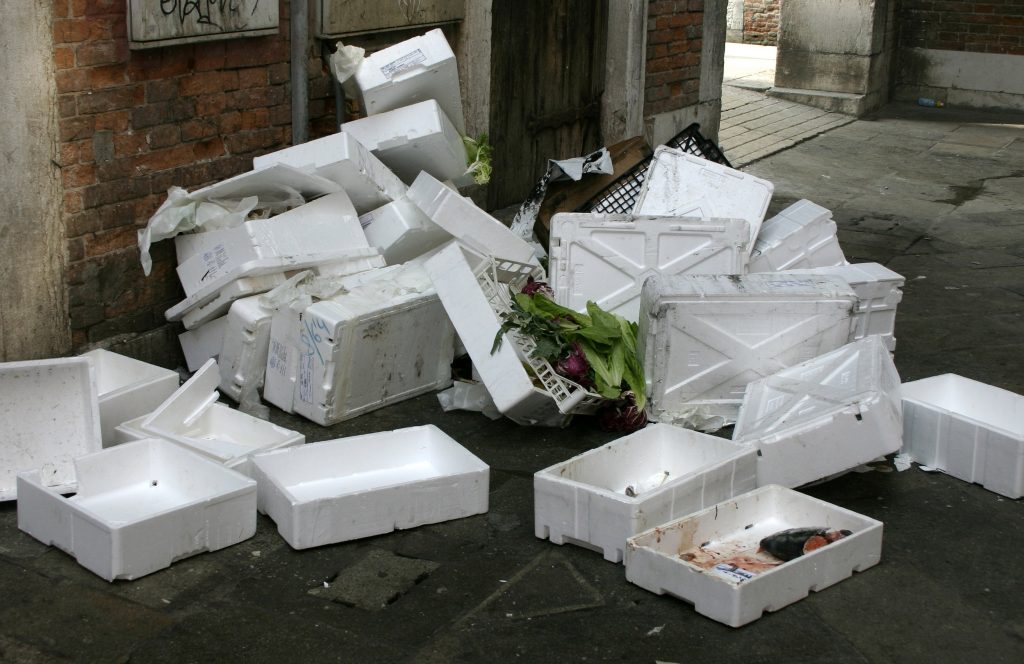 Polystyrene (sometimes known as Styrofoam, and properly known as “Expanded Polystyrene Foam”) was first made in the 1960s, and many millions of tonnes of it are produced today.

Its popular because it has these properties:

Some of these properties are also why it is difficult to dispose of.

Because it is often used for food packaging due its thermal insulation, polystyrene frequently ends up in landfill. Some estimates suggest it could comprise of as much as 30% of landfill waste.

Producing polystyrene also uses chemicals which could damage the environment.

The good news is that polystyrene recycling does take place, even if it is in small amounts. In the UK around 100 tonnes of polystyrene is recycled annually.

The process can also be done with limonene, a solvent made from orange peel!

There are currently no Council facilities for polystyrene recycling in West Yorkshire. When we spoke to Wakefield Council, they informed us that all polystyrene is sent to landfill, and the same applies to Leeds and Huddersfield Councils.

Yes Waste can recycle polystyrene, as we work with major recyclers to deal with waste in bulk.

We can come and collect polystyrene anywhere in West Yorkshire – especially Wakefield, Huddersfield and Leeds. We can also collect it with packaging or as part of a general waste collection too. Please call to discuss what you need.

Making a booking for Yes Waste to come and collect all kinds of waste including polystyrene recycling is straightforward.

Hi I’m the marketing person for Yes Waste. For queries about waste management, speak to the experts on 0800 058 2522